Know everything about the Australian Bushfires

If you have been aware of the happenings across the world, you’d know that the “country down under”, Australia has been burning rapidly since September of last year. The once beautiful country is now left in shambles and blackened ashes in several parts across. The terrible bushfires which ignited back in September of 2019 is still ongoing, killing around 25 people and millions of wildlife animals, to an extent that zoologists are questioning the position extinction of koala. 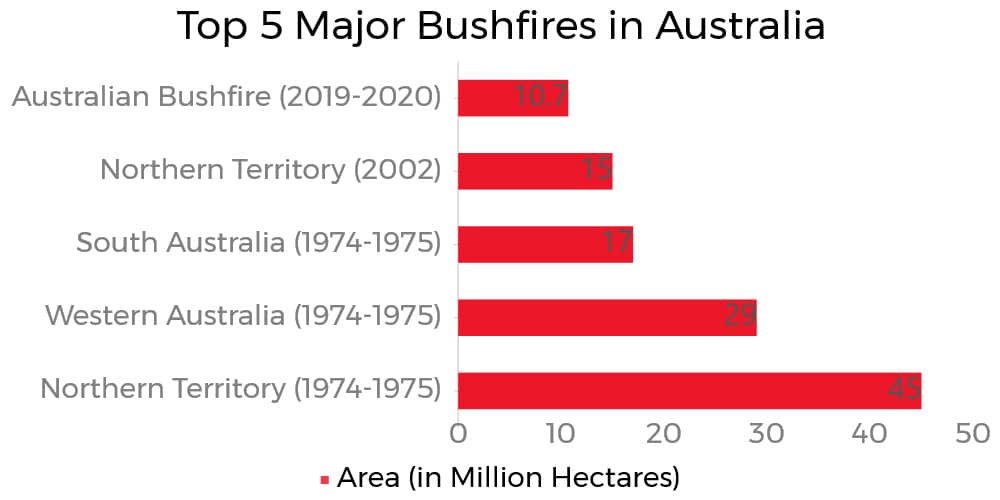 But, with so many things happening around in this country, it might be hard for one to keep up with everything that has been happening. Don’t worry, we are here to provide you with every last detail along with some useful donation links that you can check out to help support the cause and provide your help for relief.

Where did it all start from?

If you have been late to knowing the news, know that the fires started or erupted in New South Wales, Australia to a massive extent that the government had to declare a state of emergency in the month of November.

The fires that have caused damage and evoked the destruction is believed to be the worst one till date, burning over 15 million acres of land which is twice the area of what the country Belgium is spread across.

The fire that erupted around the New South Wales and the Victoria region in Australia has already claimed the lives of around 25 people, including three firefighting volunteers are missing and over 1300 houses have been burned down to ashes.

While the entire world was celebrating the New Year’s Eve, people across Australia were praying for the fires to just mellow down and stop. The fires did get worse around the time, forcing people to evacuate their homes and take shelter in the beaches across New South Wales and Victoria.

In the current state, it is believed that over 100 fires are still burning.

It is not just the state of the fire that is causing the destruction, the smoke released after burning is just as much of a threat. With the heavy blanket of smoke around and the skies painted red, Australia recently recorded the worst reading in the pollution index with a number 23 times more than what is considered harmful.

What caused the fires?

This is a question that has been triggering every single mind in Australia and across the globe. The answer to this question is tough because this isn’t the first time that bushfires have been ignited in Australia. The same has been an integral part of the country and has been used for regeneration of the land.

Fire management has also been a very commonly followed practice around in Australia but what caused this kind of a situation that has left so much damage behind and is continuing to do is a question that needs immediate answers.

Bushfires can actually initiate from a number of reasons, a lit cigarette or even a lighting thunderstorm, the possibilities are quite extensive. It all comes down to the how but everyone around has been trying to draw a conclusive answer to the said question.

The dry weather and the lack of rain could also be a concern contributing to the fire. Given the fact that the temperature in Australia has been so high, it has become even more difficult to tame the fire. The temperature just last month touched 50 degrees Celsius further making the situation worse.

The risks of bushfire were a matter that many of the firefighting chiefs were aware of in 2019. This was a concern that they have been meaning to meet the Australian Prime Minister, Scott Morrison for. But, the problem that they faced was the fact that their pleas were left unheard.

Does climate change have anything to do?

Firestorms are a very common occurrence in Australia, mainly because of the dry and arid weather conditions. But, while the same isn’t new, nobody expected the same to take the shape that it took. It has not just destroyed the habitation, it has killed millions of animal species, 25 humans and more and more people and volunteers are missing every single day.

According to the statistics and the reports, it was mentioned that the firestorms came early than they were supposed to. The temperature on December 18th, 2019 was recorded one of the highest at 41.9 degrees, further contributing as a trigger to the situation.

The constant dry weather and the drought was what the ecologists believed fuelled the fire even further, leading to the rampant destruction that everyone is experiencing around.

Scientists and ecologists believe that climate change has to play an integral role in igniting the wildfire because of the volatility of the situation.

People have suggested saying that Prime Minister Morrison has been reaping his own sown seeds on neglecting the alarming bells of climate change and taking the necessary measures before things got out of hand.

Even with the rain that poured down after so many months, it has brought temporary respite and not a permanent solution to the situation at hand.

Which areas are witnessing the wrath?

If you are here wondering that the fires were localized to just New South Wales and Victoria and that the impacts aren’t widespread, you are completely mistaken.

Even though New South Wales and Victoria have experienced the majority of the impacts and the downfall, the smoke and the accessory has impacted the adjoining cities and areas too. The Gosper Mountain fires, which is considered one of the biggest this time around, has perished over half a million hectares of forests.

That doesn’t stop there. The rough estimate of the damage till date is believed to have crossed 8 million hectares of land which is insane. This is calculated to be 10x more than what Amazon rainforest fires experienced in damage.

As mentioned, it is not just the fire directly that is impacting the condition, but the smoke and the ashes too. According to the reports, the dust, smoke and ashes from the fires have spread across the ocean affecting New Zealand as well.

Balmoral, which is a small town located in the south western part of Sydney also experienced bad rate of destruction. Even with the rainfall, the reports suggest that because of the high temperature, there are further risks of the situation becoming even worse.

Aside from New South Wales, Victoria is the second part that has been experiencing the worst hit. Over 800,000 hectares of land has been burnt down to ashes. It has killed 2 people and has even burnt down 43 homes in East Gippsland.

Over 1000 tourists and residents have already been evacuated from the spot to safety.

In Southern part of Australia, the Cuddle Creek fire has been impactful enough in destroying over 80 homes. It has gravely affected the Adelaide Hills region.

How worse is it in comparison to the Amazon rainforest and California fires?

With the reports that the fire session is supposed to exist for two more months, the Australian bushfire has managed to destroyed 46% more land and casualties that what it was during the Amazon rainforest fire. 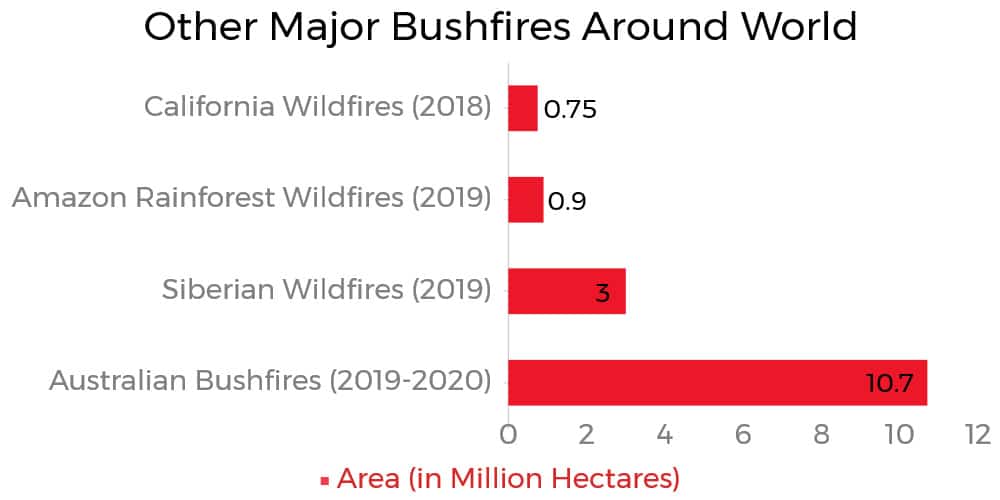 If the reports are to be believed, it is said that the damage caused in the Australian fires till now is ten times more than what happened in the Amazon rainforest and three times more than the results from the Siberian wildfires.

What is the situation of wildlife?

Local workers and volunteers are working around every single day to help as many animals as they can. According to the ecologists from the University of Sydney, they are speculating that over 480 million species of animals, birds and reptiles have already been killed in the bushfires.

The destruction has been so vivid and widespread that the scientists are worried that this could wipe out the entire existence of flora and fauna from the country in the long run.

According to special reports, it is believed that over 8000 koalas, which is 30% of the koala population in the New South Wales has perished in the bushfires.

The ecologists are also reporting that several of the plant and the animal species which were priorly immune to these kinds of bushfires are now perishing as well.

Who are helping reduce the fire?

Since bushfires are not uncommon in Australia, the country does heavily depend on the firefighting volunteers for managing the rural bushfires.

Aside from that, the community has also come together to help and play their part and contribute to the tragedy. The country also does depend on bigger developed countries like the United States who have a better fire management system.

The Australian military has also sent in their own aircrafts and vessels along with 3000 army reservists for help. Help and firefighters from USA and Canada has also been sent to the country.

Given the intensity and the condition of the spread of the fire, it is not humanly possible to bring it down. The rain has brought some respite temporarily but more measures are being looked into to further help fight the fire.

The much needed rain in the country which is believed to bring in the relief is still months away, enhancing the risks of the fire still being potent around the country.

How can you do your part?

Given that the country is in such a state of emergency, many charities have opened up and people from across the globe, including celebrities have been putting in their money to help bring relief. At this point, even a dollar helps. There are several charities targeted towards helping firefighters, wildlife conservation and even the general relief and restoration that you can donate to.

Some of the links will be highlighted for you to take a look into.

There are a number of other available donation sites and relief funds that you can contribute to. Just surf through the internet but the ones mentioned above are the primary ones.

If you can’t contribute, there is nothing to be ashamed of. Not everyone can spare pennies but you can do your part by being vocal about the situation and raising awareness surrounding it.

If required, you can tweet and share the story with direct links to the funds, urging people to spare as much as they can afford for the situation that Australia is experiencing at the moment.

Given that negligence and human behaviour is one of the most common reasons behind the condition of wild bushfires that Australia is experiencing, it is high time that we change our way of lives. Climate change is because of human intervention and the luxury that we are availing that is impacting our environment.

If you want to play your part, start by being a little more considerate about the environment, trying a little at a time to bring forth changes that impose for a better tomorrow.

There are several nonprofit organizations which uses the profits it earns to plant trees across the world where the needs are the most. Go through those platforms and see what you can do to help the cause. If possible, spare a prayer for Australia and everyone affected around.

What are Chemistry Charts?