Anupam Kher, an Indian Film Actor published a book in 2011, which was titled, “The best thing about you is you”. The book revolves around the process through which a person attains self-awareness and inner peace through citing examples from the authors life. One of the chapters spoke about how we’re the masters of our own happiness and sadness. He used a corporate lingo as reference and which I’m going to talk about in great detail today. It’s called a SWOT analysis. 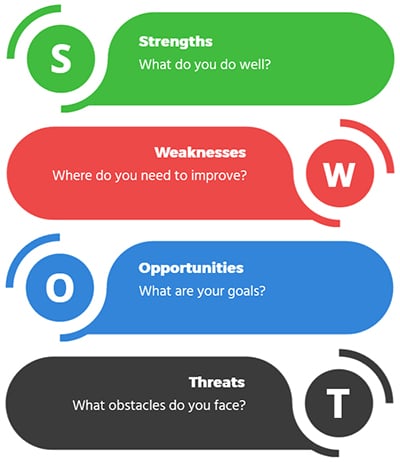 You probably heard it before. Well, I’ll give the simple definition of it. It’s a technique of analyzing one’s strength and weaknesses and also identifying external opportunities and threats. In the chapter, he spoke about how in order to find happiness and fulfillment, we must align our aspirations and goals in accordance with our findings aka our SWOT Analysis to find contentment in our lives.

Companies follow the same practice. The SWOT analysis acts not only as a benchmark but also as a guideline on how to move forward. In Business, we consider the company as a separate entity of it’s own. We give life to it. The creators of a company treat the company as their own child. Nurturing it and helping it grow. Naturally, the elements of the company, which are the people, are also considered as the conscience of the company. They perform the job of self-reflection from the company’s perspective to understand what are it’s advantages, what are it’s limits, where can it exploit opportunities and how it can avoid threats.

Before we go in more depth on SWOT Analysis and it’s tools. Let’s give a basic definition to each of the 4 characters of the SWOT along with examples using the players of the streaming business.

In terms of corporate, Strength’s are a company’s tools and characteristics that help it to combat threats and seize opportunities. Strengths generally give a company a competitive advantage over it’s rivals. It’s interesting to note that every company has at least one unique strength.

Example: In the Streaming Industry, Netflix offers freedom to content creators to break barriers and borders when it comes to writing content for shows on their platform. However a streaming service like Apple keeps a very close watch on the kind of content writers are producing for their platform. Netflix’s offer of almost zero restrictions proves as a strength to attract more writers to the platform.

They are internal defaults or characteristics, which prove to be a setback and a hindrance in the functioning of business. Weaknesses can range from Financial, quality of product, personnel etc.

Example: While Netflix enjoys the market share in the streaming business because of it’s early entry advantage, the business is slowly going to lose share within a few years due to it’s financial limitations. Competitors such as Apple & Amazon are billion dollar valued companies and so have the advantage of excess cash flow to fund numerous projects as compared to Netflix.

One of the natures or a characteristic of an entrepreneur is to always look for and identify opportunities. It’s as the saying goes, if you think of a yellow car, all you’ll see around you are yellow cars. Likewise, an entrepreneur is always thinking for opportunities so naturally, he’s always looking around for opportunities that would benefit the company. While there are a lot of factors to consider, time is the one main factor which pressures companies as to when to seize opportunities. The SWOT analysis gives a better overview on whether to seize them immediately or in the near future.

Example: With the rise of the era of streaming, many companies have decided to invest in the business to make profits and also provide entertaining content. Marvel had Television series based on the adaptation of some it’s popular comic book characters such as Daredevil, Agents of Shield etc. These shows were on popular demand on Netflix until Disney decided to introduce it’s own streaming platform, Disney + and take back their original content to stream on Disney’s platform. This is an opportunity to gain an advantage in an already competitive market.

These are uncontrollable external factors which are at risk of harming the functioning of your business. Threats can be predicted and measures can be taken to either avoid or overcome it. Threats can be both internal as well as external. Internal threats are fairly easier to handle and the risk doesn’t not seem as high as compared to external threats.

Example: Netflix has been on tight grounds the past year after spending 100 Million on Friends and losing it to Warner Media as they prepare to launch their own streaming service. The same applies to their list of Marvel TV Series, which were removed last year as Disney begins to launch their own service. Because of these factors, Netflix is in imminent threats to lose market share not only from the audience but also from shareholders as new platforms make their entry. Right now Netflix is spending millions in original content such as their upcoming Martin Scorsese film, The Irishmen which Netflix allegedly spent 200 million dollars on. The end result is hiking the subscription prices from the consumer to make up for investments. But even with all their investment they only manage to barely break even in the yearly reports and are still under the threat of suffering heavy losses in the future. How they plan to remain at the top will be an interesting thing to watch.

When to prepare a SWOT Analysis?

SWOT Analysis are also ideal to conduct before even entering the market. Take the example of Apple. It was originally founded as a consumer goods & technology organization. Now they have shares in industries such as Music Streaming, Television streaming etc. Apple would not have entered these industries without conducting a SWOT Analysis to understand the benefits and setbacks they are likely to experience as a company before making the plunge.

Tip: You can create/make SWOT analysis diagram on Lucidchart.

When it comes to business, every entity is unique to their own strengths and limitations. Like humans even business organizations tend to compare with one another and try to make sense of why one is benefiting and the other is not. But the efforts are mainly futile. In business, acting rational is always ideal so that the objectives of the company are attainable and the brand remains true to it’s values.

In some sense you can call Business as an extended physical manifestation of it’s founder. Even though it’s treated as a separate non- living entity, we consider it as a human and treat it like one as well. And it’s important for every human to also reflect and create a yearly SWOT Analysis to understand how much progress he/she has made. Progress is the key ingredient to identifying success.

Kanban Board: A tool to maximize work efficiency