What is PESTLE, PESTEL or PEST Analysis?

Running an organization is not easy. To be fair, it comes with its fair share of obstacles but how one assesses them and mitigates them is what makes all the difference. With everything that goes around in every process and project in an organization, it is often tough to get things done manually if there is no strategy involved. The PESTLE, PESTEL or PEST analysis is exactly what provides a strategy and backbone to the process.

If you have been assessing the possible risks or even the shortcomings that you could be experiencing, PESTLE analysis can make the process a lot easier for you. To help you gain better insights, we have jot down a very descriptive article for you to look into.

What is PESTLE analysis?

Before anything, it is important that one knows what the basic definition of the process means. A PESTLE analysis is a strategized framework or tool that is predominantly used by the marketers to analyze as well as monitor some of the macro environmental factors that leave behind an impactful difference on the progress of the organization. 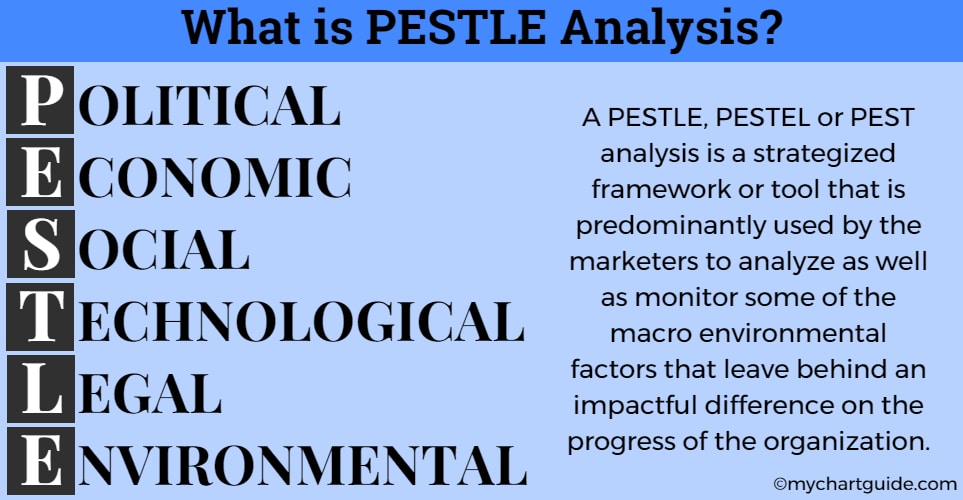 The results that these marketers find from the PESTLE analysis is what is later used in the formation of the SWOT analysis to further carry the process forward.

For the most part, a PESTLE analysis takes six major factors into account, including the following:

The name PESTLE is thus derived from these factors that are readily analyzed in the process. It is often considered as an extension for the very popular PEST analysis which only considers four of the factors while PESTLE does take things a step ahead of time.

While it is predominantly termed as PESTLE, you might often find people spelling it as PESTEL as well. Both of them are correct because the elements included remain the same in either of these.

What are the elements involved in PESTLE analysis?

As we gave a brief intro, a PESTLE analysis includes six different elements that the marketers focus on and analyze to further assess the kind of impacts each one of them would have on the overall progress of the organization.

Let us explain each and every element involved so it’s easier for you to understand, shall we?

The political factors that the marketer analysis in this process does pertain to not just the local but also the global politics. In this form of analysis, the marketers and the experts involved tend to focus on all the factors that are responsible for the salient regulation of the law and legal entities.

It is nothing very dramatic or very complicated. Things under this political umbrella falls into the kind of state of politics around in the state and the country and even the impacts the laws and jurisdiction could have on the overall progress and entity of the organization.

If you are wondering what could include under the political factors, they include:

For smooth running of any organization, it is important that one focuses on the economy side of the same. These factors are the determinants for the overall economic performance and such. It could include a number of factors like the economic growth, inflation rates, disposable income of the consumers, interest rates and so much more.

The list is never ending but the impacts around these factors leave behind a very important imprint on the overall functioning of the organization. They tend to have direct as well as indirect impacts on the growth of the company on the long haul.

The same is believed to be the case because the economic factors tend to have direct impacts on the purchasing capabilities of the consumer and if the economy is bad, chances are that the same will end up affecting the supply demand chain in the long run. The government’s impact on the economy is also something that is worth taking notes of.

Next on the list of the elements in the PESTLE analysis are the social factors. They are also often termed as the social factors as well. These are the factors that connect directly to the general public and the target customers and the kind of behaviour that they have with the products and services introduced by the company.

These factors are one of the most crucial ones when it comes to the PESTLE analysis done by the marketers. The reason why that is the case is because they help in targeting a certain demographic of customers.

In addition to that, some of the social or social factors that are worth looking into are the consumer lifestyles, the classes, the rate of immigration and emigration and even the family size of the target audiences.

With the kind of growth and development that technology has been witnessing around, it isn’t surprising that marketers deem it as an important addition to the list of factors to be analyzed under the PESTLE analysis.

These pertain to the innovations of the technology along with the advancements that tend to have direct impacts on the operations of the organization in question. They are often also referred to as the technological incentives.

There are a certain factors that influence the technological factors like the research and development, automation and a lot more. But, the one thing that is worth noticing is the fact that the technological advancements aren’t just limited to the digital technology.

The analysis of this specific elements help influence the decisions of whether or not the same industry is worth entering or not. When you have a basic idea of what is going on in terms of technology, the same can help the marketer to further prevent the company from spending on things that are not worth it.

The penultimate one on the list of elements for the PESTLE analysis includes the legal factors. These legal factors abide by the rules and regulations as per the state or the country. These are the legal factors that can impose direct influence on the business operation and the overall customer behaviour.

Many people tend to confuse between legal and the political factors but know for a fact that the both of these categories and elements are different. Some of the common factors involved with the legal elements include consumer law, fraud law, import-export law and the other legalities that directly affect the consumer.

Just like the title suggests, environmental factors are the ones that are influenced by the ecological factors that are happening around you. The same is always variable and depends from place to place and the state of the environment and climate around in that place.

These factors were not that important a few decades back but marketers are now paying a lot of attention to this, mainly because of the kind of impacts they have. The lack and scarcity of the raw materials and the environmental and climatic conditions around have become worse over time, making it more susceptible to affect the growth and process involved in an organization.

How to do PESTLE Analysis?

As mentioned, PESTLE analysis doesn’t require fancy tools or excessive programs. The only thing you need to do is be thorough with the market research and find the loopholes and the elements mentioned.

Once you identify the specific elements as we mentioned before, it is important that the marketer aligns them with the current status of the organization and the process or product in question. Analyzing these factors will later give you a better idea on how the same could potentially impact the future.

Every industry calls for different ways of analysis. For example, the kind of legal factors that are involved with the tourism industry won’t be the same when it comes round to the healthcare industry and so on and so forth.

For successfully conducting a PESTLE analysis and prepare a PESTLE chart, it is very important that one analyses each and every six of the factors that have been mentioned and assess the kind of impacts the same would have on the progress of the project that you are conducting the market research for.

Getting every single factor at the same time can be a tough nut to crack which is why it is best suggested that one does focus on taking each element one at a time or divide them among the team members, designating one spectrum for each.

What are the Advantages of PESTLE Analysis?

If you are here wondering why a marketer needs to indulge in this specific analysis for the growth of the organization, you are in for a ride.

The advantages of PESTLE analysis are massive which is one of the reasons why it has become a very common and impactful step that every marketer is indulging in.

Some of the most common advantages of doing the PESTLE analysis include:

It is cost effective

The very first and possibly the most important reason why PESTLE analysis has gained so much popularity is because of how cost effective the process is. The only thing that one does need to actively invest is the time. While it doesn’t require any additional program or tool, you just need a proper understanding of the market and have a pen and paper to jot everything down.

It is also quite clear and straightforward because you will know everything once you start with the process – the kind of results and how long the market research will take and so on and so forth.

Better understanding of the market

Yet another one of the advantages of the PESTLE analysis is the fact that it helps with better and in-depth analysis of the market and the requirements. This helps in understanding the direct and the indirect factors around the environment that could be affecting one’s business.

This analysis helps you into gaining a better and in-depth look into things that you otherwise wouldn’t. This also helps you assess the factors involved that could further contribute to the success of the launches. It also hones the better polishing of the strategic thinking for improved results.

Improved alertness through the process

When it comes to a product launch or anything or that similar strata, chances are that every single stage required you to be alert. This allows the marketers to closely analyze all the changes involved and then devise a plan to further multiply the profit that you otherwise didn’t have idea about.

Without a proper PESTLE analysis, there are chances that the same could end up directly affecting the progress of the business by imposing a potential threat.

If you are just starting out with the analysis, you can follow through the process to find the kind of path that the social channel is heading towards. This does have direct impacts that you possibly have no idea of. You get to understand your target audience better with this analysis as well.

For the marketers who believe in scalable results, the only way to get that is through thorough market research and PESTLE analysis. It does play a very crucial role in the growth of a business which is one of the reasons why skipping out on this is not a favorable option.

How to make a Pie Chart in Excel?